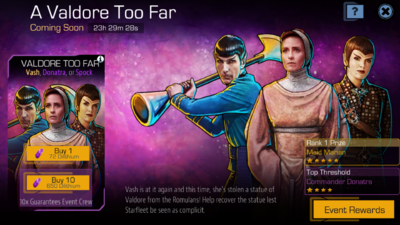 Vash is at it again and this time, she's stolen a statue of Valdore from the Romulans! Help recover the statue lest Starfleet be seen as complicit.

Vash is at it again and this time she has the Romulan Valdore warbird on her tail! As a courtesy following her past positive interactions with the Federation, Donatra opens a comm channel to Starfleet, asking them not to let Vash get away--she’s stolen the statue of Senator Valdore! The Romulans are not pleased and Donatra warns that if the Federation gives anything but its best efforts to apprehend her, the Romulans will see that as aiding and abetting a fugitive! [1]