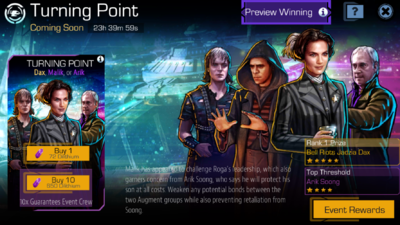 Malik has appeared to challenge Roga’s leadership, which also garners concern from Arik Soong, who says he will protect his son at all costs. Weaken any potential bonds between the two Augment groups while also preventing retaliation from Soong.

Augment Malik has challenged Roga Danar’s leadership, and Bashir (now assisted by Jadzia Dax) believes that if this rivalry is encouraged, the Augment rebellion will destroy itself without causing further damage to the galaxy. However, Malik’s “father” Arik Soong strongly objects to this course of action, believing it can only end in Malik’s death--and he may be willing to take dramatic action to prevent it. [1]