The Second Battle of New York 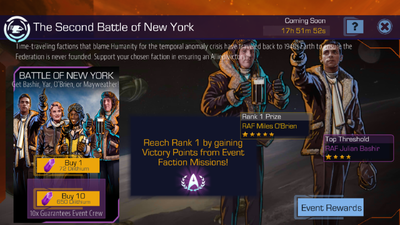 For the second run of this event, see The Second Battle of New York 2

Time-traveling factions that blame Humanity for the temporal anomaly crisis have traveled back to 1940s Earth to ensure the Federation is never founded. Support your chosen faction in ensuring an Allied victory!

The temporal powers that once fought a war to change history are at it again—this time trying (in vain) to prevent the current temporal anomaly crisis from ever occurring. Several of these powers blame the Federation for the crisis, and are thus engaged with ensuring Captain Jonathan Archer and the NX-01 do not survive the First Battle of New York. If Captain Archer never founds the Coalition of Planets, the United Federation of Planets will never exist!

Adding to the confusion are the Hirogen—who promise to ensure Captain Archer’s survival as long as they get to hunt as many Axis powers as they wish—and Section 31, suspected of having taken over the Department of Temporal Investigations. You must assist whomever they believe will ensure an Allied victory and Captain Archer’s survival, while getting the opportunity to make decisions about who will escape this timeline and who must remain behind.[1]

Victory Points earned for each faction will determine which faction "wins." After the event ends, members of the top five squadrons will be given a chance to vote on which of two characters gets to advance the storyline. After that, the top five individually ranked players will get to decide how the story ends.[2]