For the first run of this event, see Quadrilateral 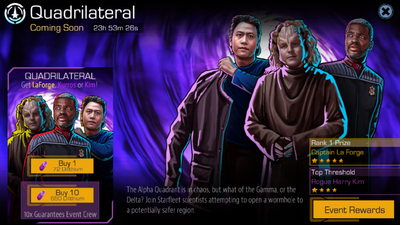 The Alpha Quadrant is in chaos, but what of the Gamma, or the Delta? Join Starfleet scientists attempting to open a wormhole to a potentially safer region.

Quadrilateral 2 is an Expedition Event offered in Star Trek Timelines. Quadrilateral 2 will run from 12:00 PM (ET) Thursday, April 27, 2017 through 12:00 PM (ET) Monday, May 1, 2017. It will consist of six Normal, Elite, and Epic missions. These missions will have a rare reward of Victory Points, which unlock Threshold Rewards.

All missions take place at Bajor.

Denizens of the entire galaxy have appeared in Federation space, which has been physically altered as a result of the temporal anomaly crisis. Has the same occurred in the Gamma and Delta Quadrants? If not, would they be safe ports in this storm? Join a group of scientists attempting to establish a stable wormhole to one of these quadrants. [1]