For the second run of this event, see Liberty for All 2 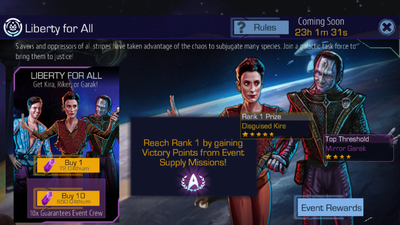 "Slavers and oppressors of all stripes have taken advantage of the chaos to subjugate many species. Join a galactic task force to bring them to justice!"

Liberty for All was the second Galaxy Event.

For each mission, certain special items are required which can be assembled from standard components and equipment. To create the item, a crew member with a certain skill must be assigned. The better the skill, the greater the chances of receiving a Intergalactic Bill of Rights. Bonus crew will greatly improve the odds. For each item creation, as well as for delivering a certain number Intergalactic Bill of Rights, the player will receive victory points.