For the second run of this event, see Children of Apollo 2 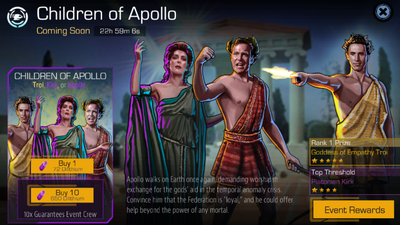 Apollo walks on Earth once again, demanding worship in exchange for the gods' aid in the temporal anomaly crisis. Convince him that the Federation is "loyal," and he could offer help beyond the power of any mortal.

Children of Apollo is a Faction Event beginning Thursday, February 23, 2017 and ending Monday, February 27, 2017. Players can complete shuttle missions for the Bajoran, or the Ferengi Traditionalists. These missions will drop Victory Points, which unlock Threshold Rewards.

Sensing an opportunity, Apollo has swooped down from Pollux IV and returned to Earth, declaring that it is only he and his fellow gods who can deliver the Federation from the temporal anomaly crisis. Can you redirect Apollo’s benevolence towards the Ferengi Traditionalists, who are in need of a miracle, or the Gamma Quadrant by way of the Bajorans, who know how to speak to a god? [1]