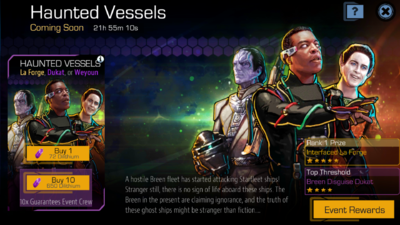 A hostile Breen fleet has started attacking Starfleet ships! Stranger still, there is no sign of life aboard these ships. The Breen in the present are claiming ignorance, and the truth of these ghost ships might be stranger than fiction....

A fleet of Breen ships has dropped out of warp in the Alpha Quadrant and begun attacking on Starfleet vessels! The twist? All sensor scans indicate that the ships are devoid of lifeforms. The few Breen who have found themselves transported to the Alpha Quadrant via temporal anomaly insist that they have nothing to do with it. Join Geordi La Forge as he attempts to virtually explore and take control of the Breen ships, and determine both who is controlling them, and why they would want to start a war between the Federation and the Breen Confederacy. [1]